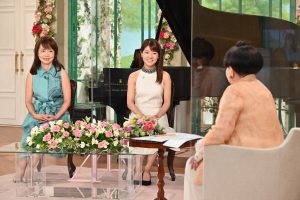 I started fifth grade this year. And at last, we can learn English at school! But because I’ve been studying English on my own for years now, it’s extremely easy for me. I think fifth grade is too late to begin learning English. It’s best to learn foreign languages from a young age.

I think when present children grow up, they’ll all have to know English. Nowadays, business is becoming globalized, and the common language of people all over the world is English. Japanese people have to communicate better with foreigners. Although not so many foreigners came to Japan in the past, now, many are coming to visit, live and work here. So we must talk with them. If we can’t speak English in the future, we can’t have a job.

But we have to hurry up without thinking slowly, because it is more difficult to learn a foreign language at an older age. Older people are busier, and many work all day. They have lots of things to think about, and tend to lose interest in any single activity. They can’t be as curious as children, who have more open minds and can focus intently on their favorite things. For example, a young child may ask their mother to read the same book to them again and again every day, even saying, “Read this page again,” two or three times. This shows that, if they develop an interest early, young children are stronger at concentrating and practicing something like a foreign language. An older person usually has neither the time nor interest in this type of repetition.

Moreover, young children are not afraid of mistakes. They’ll say exactly what’s on their mind, so they are more willing to practice using a new language. On the contrary, older children worry that if they make a mistake, everyone will laugh at them. They cannot build confidence in speaking a foreign language that a young child can. A younger child can be more curious and free with their practicing.

Now that I’ve grown up a little more, I foresee that if I had learned English later, I wouldn’t know as much. I would regretfully think, “I should have learned earlier…” Maybe I would find it difficult to enjoy. But now, I think learning English is fun. My knowledge of English will be useful in the future for things such as writing letters to foreigners and talking business. This is why I think young children – who are very curious and not afraid of mistakes – are at the best age to learn foreign languages. I will keep studying language, and I want to communicate with people all around the world.